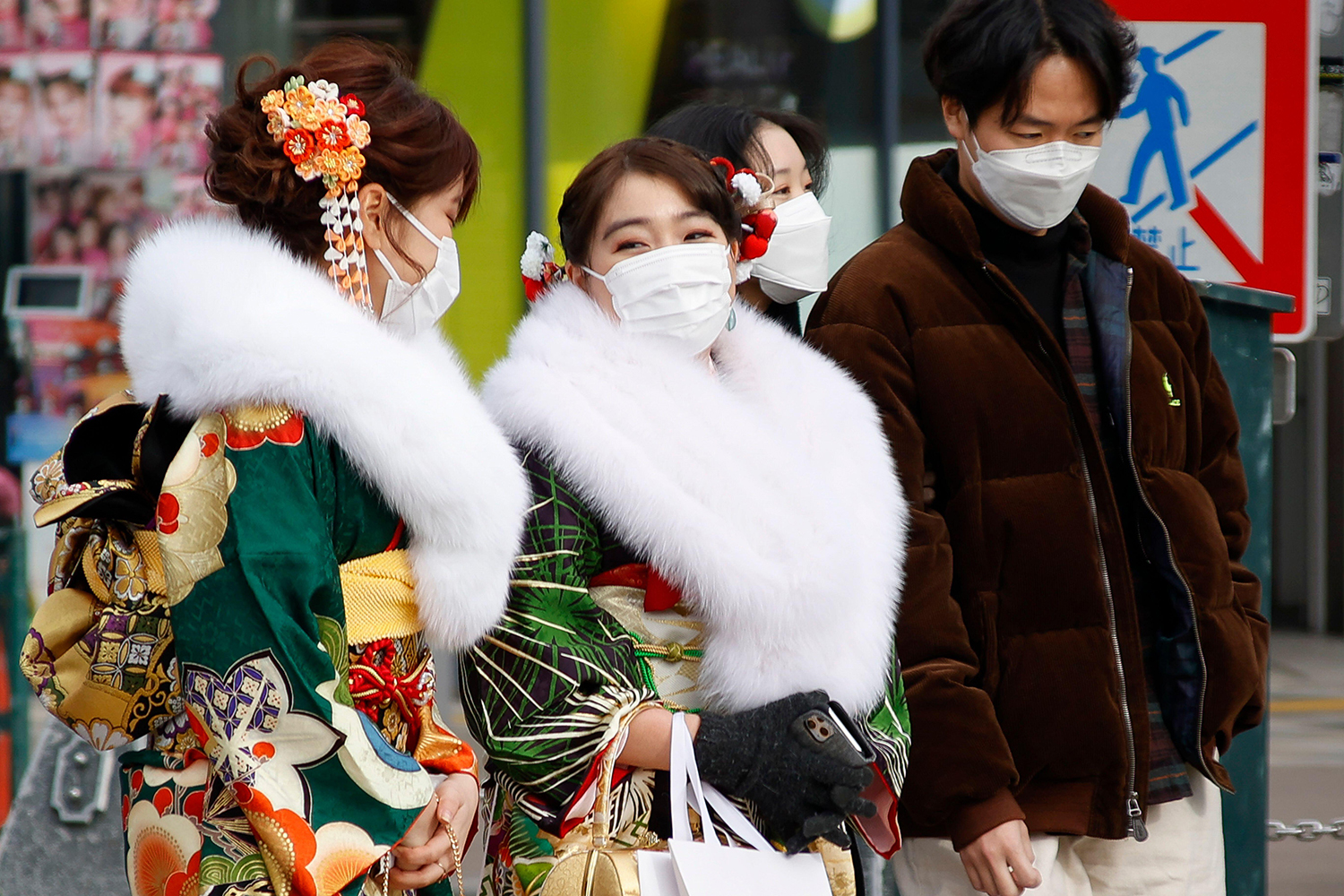 When China reported its first outbreak of COVID-19, Japan went into high alert. After having suffered the 2011 earthquake and subsequent Fukushima nuclear accident, and seeing how fast other viruses had spread in the globalized world, Japan’s population and government were prepared for the unexpected.

On Jan. 16, 2020, Japan detected its first infection. Less than two weeks later, the government had set up a national anti-coronavirus task force. Filled with scientific experts to whom the government was ready to defer, it aimed at controlling spread through “implementing a series of measures flexibly and swiftly, thinking outside the box and firmly understanding the characteristics of the virus,” in the words of then Japanese Prime Minister Shinzo Abe.

The Pillars of Japan’s Response

Masks & Hygiene: Mask use is ubiquitous, as is hand washing

Dr. Hitoshi Oshitani, Professor of Virology at Tohoku University, was one of the most prominent government advisors and has been dubbed the architect of Japan’s COVID-19 response. He had deep insight into SARS from working for the World Health Organization (WHO) in the Philippines during the early 2000s.

“There are no textbooks or manuals for a new pandemic,” he said. “What we need in such a situation is the savage mind, or Bricolage, as French philosopher Lévi-Strauss said – the skill of using whatever is at hand.” It was with this mindset that Japan’s top scientists sprang into action to figure out how the virus spreads.

The tragic situation of the Diamond Princess cruise ship, which was quarantined in Japan in early February, not only cast the global spotlight on Japan but provided the country’s scientists with valuable lessons about the virus. By Feb. 20, the ship was home to half of the total coronavirus infections detected outside of China, with more than 700 passengers and crew members infected with the disease.

“I believe that we were purely lucky with many incidental happenings. Japan is close to China, and thus, we had opportunities to observe various clusters in different geographic areas from February to March 2020,” said Dr. Hiroshi Nishiura, Professor of Hygiene at Kyoto University, whose models and work as a government adviser were also pivotal for the Japanese response.

Observational data in hand, Japan’s scientists were soon able to garner insights into the virus’s characteristics that most of the Western world took months to figure out, if at all.

Perhaps the first breakthrough was surrounding asymptomatic and pre-symptomatic transmission. Oshitani had been comparing the novel coronavirus to other pandemics and it became clear to him that, unlike SARS or Ebola, people infected could spread the virus without presenting serious symptoms. In February, Nishiura estimated that more than 40% of secondary transmission of the virus takes place during the pre-symptomatic stage. His findings were published in the International Journal of Infectious Diseases on March 4, 2020 – a week before the WHO declared COVID-19 a pandemic.

Data in hand, Japan’s scientists were soon able to garner insights into the virus’s characteristics that most of the Western world took months to figure out, if at all.

With that fact clarified, even though it went against global scientific consensus at the time, Japan’s experts and policymakers opted for a suppression, not elimination, strategy. “Due to the stealthy nature of the virus, containment by extensive testing, isolation and contact tracing was not a feasible option to contain COVID-19 in Japan,” said Oshitani.

It’s true that China had been controlling the outbreak through draconian lockdowns; South Korea, through extensive contact tracing with the military; and Singapore with extensive testing. But Japanese officials knew that they did not have the legal footing to collect cellphone data or lock down their population like other countries. At the same time, Japan’s testing capacity was limited.

So the scientists looked at the data they had and applied it to the Japanese context to figure out the best ways of preventing transmission. Early in February, Oshitani emailed Nishiura noting how the transmission pattern of the virus appeared to be highly varied, more like SARS than the flu. Their early analysis found that up to 80% of those infected didn’t infect others, suggesting superspreading events were driving most contagion.

With that in mind, Japan adopted a “cluster-busting” approach. Most western countries use a prospective contact tracing system, where someone tests positive and health officials try to identify and isolate the people the positive person may have infected. Japan does that too, but its contact tracers, a powerful team of around 8,000 trained public health nurses, also act as detectives – trying to get to the bottom of where the original person was infected. This helps them find superspreading events, which not only allows them to identify more exposures but also produces key epidemiological data about the conditions that lead to big outbreaks. These field investigations are also supported by genome sequencing.

When looking at data from clusters, one factor became incredibly clear: most transmission occurred in closed environments with poor ventilation. Nishiura’s group had published a pre-print with their evidence by March 3, 2020, just two days after New York detected its first case. Oshitani, who wrote a WHO publication in 2017 about how the main mode of transmission for influenza is short-distance aerosols, not droplets, also suspected it was the same for SARS-CoV-2.

“Several quarantine officers and nurses were infected on the Diamond Princess. I was quite sure that they were implementing so-called droplet precautions – wearing surgical masks and conducting rigorous hand-hygiene. This fact strongly suggested that droplet precaution alone was not so effective in preventing the infection,” he explained.

Early on, Japan’s scientists, through close observation, understood several key aspects of the pandemic – the importance of ventilation, short-distance aerosol transmission and the pivotal role of superspreading events. Politicians seized on the advice and sent the population a simple message by late March – avoid the 3Cs. A simple communication device to remember that closed environments with poor ventilation, crowded places and close contact settings were the riskiest. Officials didn’t need to insist on masks, as the Japanese population was used to reaching for them during times of sickness or allergies.

“I don’t think there was any problem convincing policymakers about scientific findings such as a cluster-based approach and 3Cs concept. In fact, the cluster task force was established within the Ministry of Health, Labor and Welfare as early as Feb. 25, 2020,” recalled Oshitani.

Meanwhile, many people in western countries were focused on surface transmission. The smell of bleach and disinfectant filled the air, covered groceries and was even suggested as a cure via injection. Officials in not only the US but also Europe, advised against wearing masks. Even in April, when Japan sent two masks to every household, the WHO insisted that healthy people didn’t need to cover their faces. Many countries went into full lockdown, unaware of where risk lies.

When looking at data from clusters, one factor became incredibly clear: most transmission occurred in closed environments with poor ventilation.

Clear science-based communication was not Japan’s only tool to curb contagion. By March, the Japanese government passed travel restrictions for many foreign countries. Japanese residents returning from those areas were asked to quarantine for two weeks. Out of concern over new variants, Japan has recently amped up restrictions with many countries, also requiring negative coronavirus tests before and after arrival.

“I don’t think [the latest reduction] was just due to the state of emergency. I think it’s mainly due to people’s behavioral changes. It is possible that information about issues such as the sudden increase of cases over the New Year holidays, the death of a politician who was in his 50s, a strong appeal from health care workers about overwhelmed hospitals, might have led to sudden changes in behavior. We have very strong peer pressure in Japanese society,” said Oshitani.

Other factors, too, bolstered Japan’s response. The country has a strong system of universal healthcare, which is well distributed even in rural areas. “We believe it is absolutely essential, especially when facing a pandemic such as this one, to guarantee equitable access to healthcare for all people regardless of their income status, which otherwise could prevent them from seeking healthcare,” said Dr. Yasuhiro Suzuki, one of the country’s top physicians who acts as a chief advisor to Japan’s Ministry of Health, Labor and Welfare.

Culturally, a widespread acceptance of masks, even outside of pandemics, is just one of the ingrained traditions that acted in the country’s favor. Talking loudly on public transportation is considered rude (not traditionally due to viral transmission, but for the peace of the travelers) as is blowing one’s nose in public. The Japanese bow to greet people has also been adopted worldwide as a safer way to say hello than a hug or handshake.

By late March, the country had also launched a voluntary chat bot-based healthcare system called COOPERA on Japan’s most popular mobile messaging app. The AI-powered system not only collected epidemiological data but also guided people through illness and told them when they should seek medical assistance. At the same time, it proved helpful in monitoring people with exposure histories so their movement wasn’t restricted to home and advising people in quarantine such as recent arrivals to the country.

While Japan’s clever, science-based approach has kept deaths and contagions down to a tiny fraction when compared to the US, it is not out of the woods yet. Japanese authorities will continue their strategy, though variants may pose new challenges. The inoculation plan could also come across roadblocks. Due to a peculiar history with vaccinations, Japan has one of the lowest rates of vaccine confidence in the world.

“We have to be cautious in implementing vaccinations for COVID-19. It will be a big challenge to convince young people,” said Oshitani. “We have some other options to reduce the impact of COVID-19, including a cluster-based approach and more effective prevention and control measures… We should not rely solely on vaccines.”