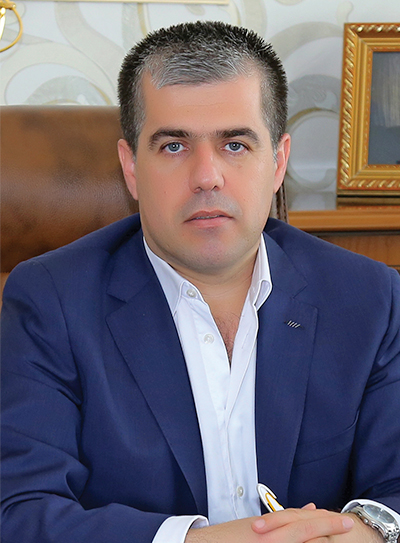 Tourism in the Kurdistan Regional Governorate (KRG) offers huge potential for visitors wishing to explore the undiscovered and endlessly fascinating region, as well as investors, as the country looks to develop its tourist infrastructure and reshape KRG’s image on the global stage. Over the last two years, visitor numbers have started to boom, says Nawroz Mawlood M. Amin, Minister of Municipalities and Tourism: “In 2016, the region received 1.8 million tourists. That increased to 2.25 million in 2017 and the forecast is 2.5 million for 2018.” Most visitors are currently from other parts of Iraq and are drawn in by KRG’s “safety, historical sites, rich cultural resources, varied customs and traditions, and beautiful landscapes,” notes Amin. However, with two international airports, travel to the region is surprisingly easy and, given the many attractions, it is predicted that local travelers will soon be joined by people from much farther afield. Erbil, the region’s capital that is home to first-class hotels and the world’s oldest citadel, is an essential port of call for history lovers but there are numerous historical buildings and over 3,500 archaeological sites in the region, many of them yet to be fully explored. Some of the most awe-inspiring include the 4,000-year-old Yazidis temple complex of Lalish, the ancient rock-carved monasteries at Alqosh and Shanidar cave, where nine Neanderthal skeletons have been discovered. The richest traditional and contemporary cultural resources are found in the city of Sulaimani at museums, galleries, theatres, concerts, literary events and poetry readings. This is just the tip of the iceberg, however, as many different ethnic groups live in KRG, each with their own traditional cultures, dress, festivals, handicrafts and cuisines — and all are welcoming to guests.

KRG’s sites of natural and undeveloped beauty include mountains that offer climbing and fabulous views, rivers, lakes, forests, verdant valleys and caves — the perfect places for adventure or total relaxation. At some of these locations, such as Rawanduz near Erbil where the breathtaking scenery includes snow-topped mountains and green plains, modern tourist facilities have been developed. Further projects are in the pipeline: for example, in July 2018, the local Faruk Holding Company announced plans to build a $1.6 billion tourist city by the stunning Lake Dukan. When complete, it will include hundreds of vacation properties, two cable cars and a purpose-built island, and is expected to attract hundreds of thousands of tourists. Amin is optimistic that many more tourism projects will soon get underway in all three of KRG’s provinces: “The government considers tourism to be a very important sector and my ministry has worked hard to establish a 10-year tourism master plan that we are following. This aims to increase tourist numbers as well as support private sector investment in tourist areas.” The incentives the ministry is providing are impressive. “Our investment laws in all sectors are considered highly advantageous for foreign investors, but we have introduced another one specifically for tourism. In addition, the KRG government has agreed to allocate a budget for the reconstruction of roads for new tourism projects,” states Amin. To further promote investment in tourism, the ministry has a program of conferences and workshops to which international businesses are invited in order to discover the potential of the region for themselves. At one of these, held in Erbil in 2016 and attended by 500 companies from 27 countries, Prime Minister Nechirvan Barzani offered them and the wider international investment community the chance to “seize the opportunity of investing in the Kurdistan Region.”

From imports to exports

While some companies are benefiting from opportunities in imports, others are turning their attention to exports

International trade is growing in the Kurdistan Regional Governorate (KRG). In 2017, for example, KRG spent $16 billion on imports, 20% more than in 2015, mostly on products like food, clothing, cars and medicines. In the case of pharmaceuticals, “KRG has high standards of quality control — all imported products are retested and have their certificates checked to remove counterfeits,” says Rizkar T. Malaasim, managing director of HRB Group, which is responsible for about 20% of KRG’s pharmaceutical sector. Malaasim set up the group in Baghdad before taking the risk of moving to KRG in 2005: “Because where there is a risk in business there is a large profit,” he says. Initially, the group’s imported from Turkey and neighboring countries, but it has expanded to work with European agencies and it is now one of Iraq’s biggest trading companies, he states: “We are connected to over 8,000 doctors and 4,000 pharmacies.”

Large trading companies also operate in the food sector, which represents about 50% of all KRG imports. Take Bamo Company, for instance, the exclusive distributor of leading Turkish brands Mahmood rice and Altunsa milk, which is headquartered in Sulaimani but employs 1,500 people at bases throughout Iraq supplying wholesale and retail customers. One food importer and distributor that has expanded into production is DLBA Dairy Company. “It was the first Iraqi company to partner with a Greek counterpart in 2008. Kri Kri, one of Greece’s largest food companies, still supplies us with yogurt, ice cream and cheese,” says DLBA’s general manager Awara M. Abdulqadir. The company later set up its own factories in Turkey and, in 2016, opened a plant in KRG, he notes: “We now sell 60 tons of locally made dairy goods across the country every day and intend to increase our range, and start exporting. However, we will continue importing Greek products and, if other international companies want to do business here, we would be more than happy to support them. Food is always needed and this is a market with a big potential.”