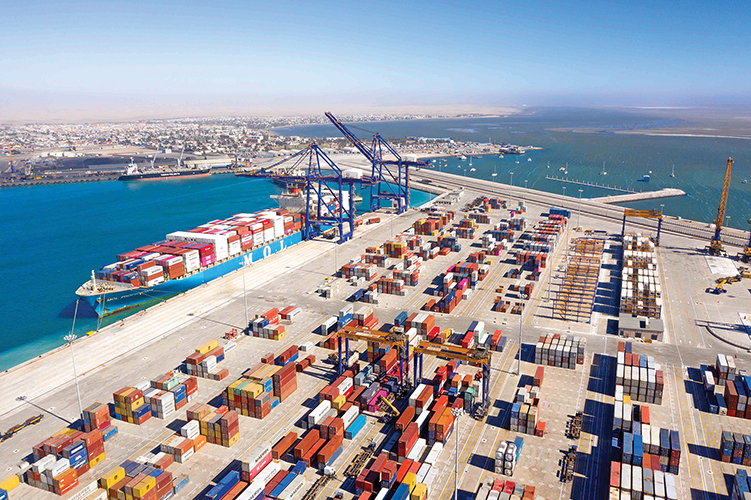 Namport’s new terminal at the Port of Walvis Bay doubles its container capacity.

Namibia is moving quickly to become a global player in green hydrogen. In 2021, a tender for its first large-scale hydrogen project was won by Hyphen Hydrogen Energy, a joint venture between investment company Nicholas Holdings and German renewables developer Enertrag. The initial phase of this $9.4-billion development should go online in 2026 and it will generate 300,000 tons of hydrogen a year by 2030. Many more projects will follow, thanks to the country’s ample wind and solar resources, government support for the industry, vast swathes of empty land lying close to the coast and two of the best performing seaports in Africa that offer fast transit to Europe, Asia and the Americas. “Namibia is rated among the top-three countries worldwide for hydrogen projects,” states Andrew Kanime, CEO of the Namibian Ports Authority (Namport). “The Ports of Walvis Bay and Lüderitz will be the points of exit for hydrogen and we’re investing in the necessary infrastructure to ensure that, when Namibia is ready to export it, we’re ready too.” In addition to building infrastructure, Namport is collaborating with the Netherlands’ Port of Rotterdam and Belgium’s Port of Antwerp Bruges on expediting flows of Namibian hydrogen into Europe’s energy systems, and it has set aside 350 hectares of land for hydrogen-related industries at Walvis Bay, the larger of its two ports. In 2021, 57% of all goods exported from Namibia left via this deep-water facility, which handles about 5 million tons of mixed cargo a year. 254 nautical miles down the coast, the smaller Port of Lüderitz is mainly used by mining and fishing industries at the moment.

As well as being crucial in Namibia’s economy, both are key export and import channels for the wider Southern African Development Community (SADC), with cross-border trade making up 24% of the goods that pass through them. “By linking landlocked SADC countries to international markets, we serve as a critical node in enabling trade and regional economic integration. We are complementing the Namibian government to realise its vision of positioning the country as the regional logistics hub for Southern Africa by investing in state-of-the-art infrastructure, cargo-handling equipment and our people,” explains Kanime. In 2019, for instance, Namport completed a $250-million development at Walvis Bay which, among other things, added a second container terminal that doubled its capacity to 750,000 TEUs, new ship-to-shore cranes, and a berth for cruise ships. As the CEO points out: “We’re also investing in building a high-performance culture that enables us to provide unparalled customer experience, efficient services and is aligned with our five core values: committed, connected, caring, creative and collaborative.” Its investments are paying off. Despite the global challenges of COVID and supply chain disruptions, Namport performed robustly in the year to March 2022, recording revenues of $75 million. “We saw double-digit growth in bulk cargo, for example, partly due to demand surges for copper from Zambia and Democratic Republic of the Congo, and South African manganese,” he says. Namport wants to continue transforming in parallel with the country’s economy. A feasibility study has been carried out for a new deep-water port in the bay adjacent to the current port in Lüderitz; the authority wants to create a terminal for the oil and gas industry at Walvis Bay; and it is augmenting bulk-cargo capacities at both ports to help the SADC meet the growing interest in its minerals. “Another goal is to establish a logistics and distribution center for the region at Walvis Bay. Many of the tenants for that type of hub now use other ports in the region, which are currently congested and inefficient. Namibia provides an alternative route for imports and exports, with the best roads and ports in the region. Investors looking for the most efficient and secure gateway into southern Africa will find it at Walvis Bay,” asserts Kanime. 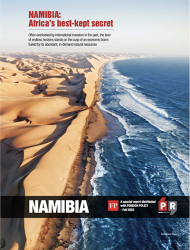