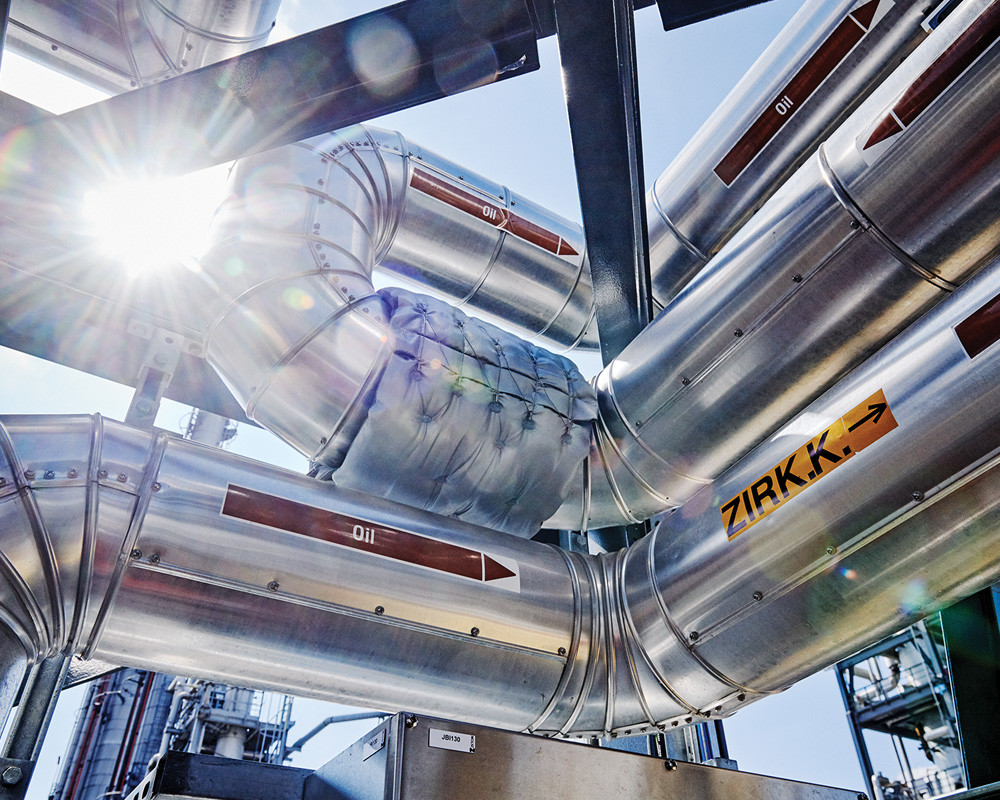 PR: Over six decades, OMV has grown into one of Austria’s largest industrial companies and it is now a global giant. With more than 20,200 employees, OMV earned over $23 billion in 2018 from its operations in 30 countries in upstream and downstream oil and gas, petrochemicals and other innovative energy sectors. Could you explain why OMV’s geographical expansion has been particularly rapid recently?

RS: In the past, we had a very strong focus on Europe and nearly 90 percent of our business was on that continent. Today, we have become a more internationalized company, with a focus on diversifying into new regions like Russia, the Middle East and especially Asia. In the latter two regions, we are taking advantage of our shareholdership: Mubadala, Abu Dhabi’s sovereign investment fund, has been a shareholder of OMV for 25 years and, together with the government of Austria, it holds a majority of the shares in OMV.

We saw that as an opportunity to start a huge capital commitment towards Abu Dhabi. We have committed about $4 billion to Abu Dhabi and, within two years, we have built an integrated business model across the entire value chain there that goes from the wellhead to the production of polymers by Borouge, which is a joint venture between the Abu Dhabi National Oil Company and Borealis, a major Austrian plastics manufacturer that OMV owns with Mubadala.

PR: OMV is one of five European companies partnering with Russia’s Gazprom to build the Nord Stream 2 gas pipeline, which will be capable of transporting 55 billion cubic meters of natural gas from Russia to Europe every year. OMV is investing a bit over $1 billion into the project — 10 percent of the construction costs. Why is the pipeline important?

RS: We have to prepare for a growing European demand for natural gas because some countries, like Germany, are preparing to switch from coal to gas and, of course, partially to renewable sources of energy. At the same time, we are seeing a very strong decline in Europe’s domestic gas production. So, Europe needs to import more gas and has to invest in security of supply.

That security of supply can be increased by diversifying sources and, with that in mind, OMV has signed contracts with Qatar and the US’s Cheniere Energy for liquid natural gas supplies. However, we should also diversify import routes and Nord Stream 2 does that. The pipeline comes with a high security of supply because it crosses the Baltic Sea from Russia to Germany and there is no transit country involved, so there is a direct link between European consumers and low-cost Russian gas.

Nord Stream 2 is in full compliance with US and European trade sanctions against Russia; there are opponents to the project but I believe they are driven more by economical than political interests. Some countries, such as Ukraine, are opposed because they want to continue to ship the gas through their country to keep transit income. Others, like the US, would like to sell more of their own gas to Europe, but they will have to compete on prices to do that.

“OMV is now a very stable performer in the trading markets, has an extremely attractive dividend policy for shareholders and has seen strong growth.”

PR: What other major oil and gas projects does OMV have in its pipeline that will help secure Europe’s energy needs?

RS: We have just finished a production investment project in Norway, where Equinor is the operator, which allowed new gas to go on stream at the end of 2018. OMV is also investing in Tunisia and planning a billion-dollar project in the Black Sea in Romania, for which the final investment decision has yet to be made.

PR: In July, OMV announced a partnership with Verbund to build Austria’s biggest solar photovoltaic plant and evaluate the possibility of constructing a hydrogen production facility. Can you tell us more about the importance to OMV of sustainability and diversification?

RS: Climate change is becoming the top priority within Europe and I am convinced that this has to become a global issue. OMV can contribute with its sustainability strategies. For example, it has announced its intention to reduce the CO2 intensity of its business activities by 19 percent by 2025.

We not only want to clean up the air but also the ocean and are investing in ReOil® technology to recycle plastic waste into high-quality synthetics like crude oil, which we can then recycle into eco-fuels or carbon-neutral petrochemicals. This is still a pilot project, but we aim to develop it to a commercial level with a capacity to transform 200,000 tons of plastic waste a year into quality products.

In addition, OMV would like to change from an oil company, our historical roots, to a gas company and we have already started changing our production split, which is now 60 percent in favor of natural gas. The company will also move further into petrochemicals to reinforce our focus on sustainability — our intention is to use oil more as a valuable feedstock than an energy component in the future.

PR: How would you evaluate the company’s recent business performance?

RS: Diversification has allowed us to stabilize our business. OMV is now a very stable performer in the trading markets, has an extremely attractive dividend policy for shareholders and has seen strong growth — within the last five years we have nearly doubled the size of the company and our earnings in 2018 were at a historic level. A few years ago, we produced 300,000 barrels a day, now it is almost 500,000 and we are targeting 600,000 by 2025.

We like growth, especially when we can combine it with profitability. In the last couple of years we have more than halved our production costs, which was tough work, and our profitability has increased tremendously. We have clearly said to the financial markets that OMV will continue to be a cash machine and I will continue to increase the cost competitiveness of the company.

A digital nation on the rise

As digitalization accelerates across all layers of society — from corporations to citizens — a new breed of ‘Made in Austria’ IT champions take on more speed in the global market.

Closing the digital skill gap and accelerating digital transformation have long been priorities for successive governments in Austria.

“Our customers establish a relation with us not for a moment, but for years and decades. We are a very stable partner on which they can rely.”

Although the country already boasts high-end digital skills compared to other markets, the nation aims to raise the bar even higher by integrating, for example, digital education into the curriculum of Austrian schools at the earliest stage.

A frontrunner in terms of digitalization is the region of Styria in the south east of the country, which has successfully transformed into a sophisticated service hub and tech cluster that hosts world-renowned companies and market leaders such as Andritz, AVL List and KNAPP.

Green tech, software, data management and gaming are some of the strongest and fastest-growing business fields in Styria at present.

“As a country, we don’t have many natural resources, but we have human resources,” says Gerald Hofer, CEO of one of the most outstanding technology players based there, KNAPP. Started by a local engineer in the 1950’s, KNAPP has carved itself a global name in the logistics automation systems business.

The group has 4,500 staff — including 200 employed by its subsidiary in Atlanta, Georgia — and it has accumulated a long history of innovation and proven performance in helping global customers to implement advanced automated distribution centers. “We are the biggest integrated solution supplier, also dealing with all the data and software processes associated with that,” explains Hofer. “That’s how we are different to other producers that produce conveyors or shuttles. We do offer equipment, but we actually always deliver fully integrated systems and offer all kinds of solutions around smart distribution and production.”

“Austria is a top business place to be and an excellent base for technology in the heart of Europe. This is where life takes place — in a dense and inspirational way.”

To engineer its innovative in-house technologies, KNAPP invests heavily in research and development (R&D) and works closely with researchers at universities, not only in Styria but worldwide. Fueled by its customers’ increasing need for its solutions, the group is poised to break the €1 billion turnover bar in the near future, with the US currently accounting for about a third of its business.

Hofer’s aim is to establish KNAPP further as an independent global high-tech brand. “We love to make profits and high turnovers, of course — but what matters most to us is putting in place sustainable and mutually beneficial partnerships with our customers. 70 percent of our business comes from existing customers and our goal is guarantee their success,” he concludes.

Styria and Austria as a whole abound with success stories like this. Another example is SKIDATA: headquartered in Salzburg, the company has become the worldwide leader in physical access control and revenue management systems, offering a broad spectrum of solutions for ski resorts, stadiums, airports and shopping malls.

In the gaming industry, Novomatic has also been redefining standards with its high-tech gaming equipment that enabled the company to reach a turnover of over $5.6 billion in 2018.

At the top of the R&D podium sits Infineon Technologies Austria. A subsidiary of the German semiconductor-manufacturing giant, the company boasts astronomical R&D spending of $560 million, 1,800 innovation-dedicated employees and last year announced a further $1.8 billion investment in a new semiconductor factory — the largest R&D investment made in Austria over the last few decades.

From electric cars to cell phone and passports, Infineon’s products are everywhere and contribute to addressing energy efficiency, mobility and security challenges.

Commenting on the group’s choice of Austria as a base, Sabine Herlitschka, CEO and chief technology officer of Infineon Technologies Austria states: “Austria has excellent public universities, universities for applied sciences and research centers that are well connected both in applied research and basic research. It also has big and small companies that interact intensively. This is a typical characteristic of Austria — having an ecosystem that is big enough so that we get the variety, while still being small enough to facilitate seamless cooperation.”