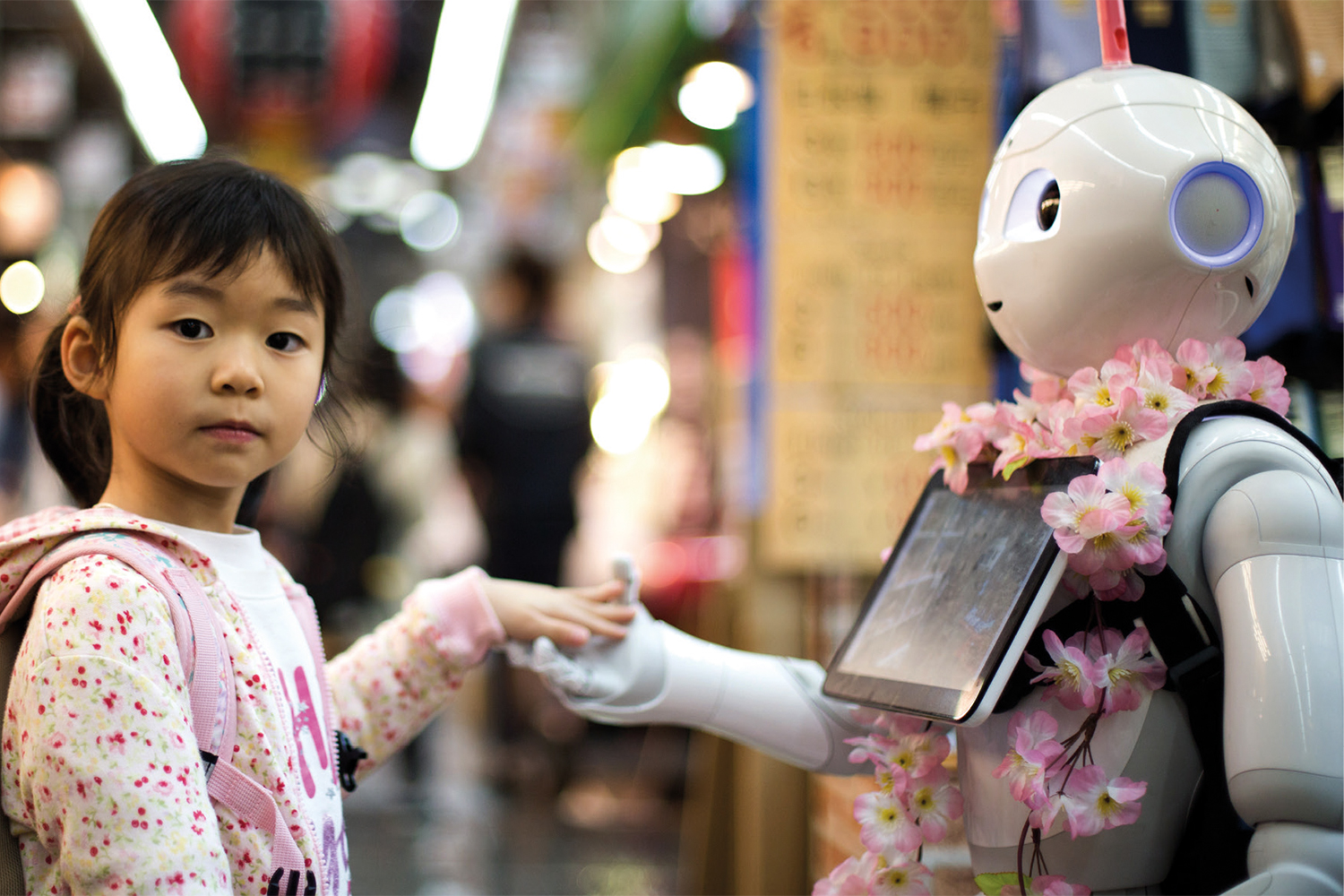 A young girl making friends with a robot in the Kuromon Market in Osaka. Unsplash

Japan’s government believes that technological innovation has been the driving force of societal change. First the agricultural revolution, then the industrial one. Now, the rise of the internet has led us to the information age.

But with the unprecedented speed of technological advances, Japan’s government believes civilization is again at the dawn of a new era. Soon, almost everything will be able to be digitally connected. At the same time, through tools like AI, we will have the power to analyze the massive amount of data coming from connected devices and derive insights in real-time. Cyberspace and physical space will further converge, creating a super-smart society.

Manufacturing: Use of AI and robots for efficiency, cooperative shipping, linking up supply chains

With this revolution still in its infancy, societies still have a choice for where it can go. One is for policy-makers to watch indifferently as technological innovations disrupt society for private profit. Another is for governments to harness the technology to reinforce power and control populations on a scale never before seen.

Japan presents an alternative. Its Society 5.0 concept draws on these technological breakthroughs to achieve a more human society. Instead of looking at improving big, complex social issues as a fiscal trade-off, it aims to leverage technology in a way that boosts economic development while simultaneously tackling societal problems and improving individual well-being. Humans are not to be the components of the system, they will instead be at its center.

Enthusiasm for this vision has rippled across Japan’s sectors. Keidanren, Japan’s main business association, has adopted working toward Society 5.0 as a main focus. Meanwhile, the government has prioritized funding for science and technology. This January, the government announced it will be setting up a fund worth as much as $100 billion for innovative research in universities.

Known as the Father of the Internet in Japan, Professor Jun Murai was a pioneer in bringing the internet to the Asia-Pacific region. He remains a key figure for his work on the future of connectivity.

What is the main challenge for the internet today?
Abuse versus proper and ethical use. To solve abuses, we need to achieve technical sophistication in terms of security and trust frameworks. To promote ethical use, the technology should work toward solving the main challenges of human society such as health and natural disasters. It should be a force for good in the world.

I think that proper and ethical use of digital data for our society should be the goal of Society 5.0. The internet certainly is the basis of it, so we should keep enhancing it – making it a better platform for society.

What are some interesting technologies coming out of Japan now?
To name a few, stratosphere communications for the internet such as Loon and Hapsmobile, which are somewhere between wifi/mobile technology and satellite technology. I think they are very promising for post-disaster internet infrastructure recovery. Plastic optical fiber for high-speed, short-distance connection is also becoming practical with its energy effectiveness. Quantum internet technology for post-public key encryption internet security is another interesting and competitive field.